Amazingly, we have been living in Amsterdam for over a year already. Wow.

It's hard to reflect on a year in a new place, because there is just so much to reflect on. New country, new language, new culture....new baby! So I decided to field questions from friends on FB. I enjoyed this process because, naturally, people asked questions that I hadn't considered. It has been fun to think back on all that has happened this past year.

I decided to do a separate post on questions related to family life.

What are the biggest differences between living in Germany and the Netherlands?*

One of the things I love about Europe is how quickly and entirely things change when you cross a border. Culture, language, the type of bread in a bakery, or the availability of peanut butter in the grocery store. Dusseldorf and Amsterdam are like night and day. Here are a few quick examples:

Beer selection
The Germans love beer and are very proud of their beer culture. It's cheap, you can drink it anywhere, any time. But it must be German beer. And probably local beer. In Düsseldorf you drink Altbier, while in Köln (Cologne) you drink Kölsch. Needless to say, there is a serious lack of beer diversity.

In the Netherlands, on the other hand they have local beers such as Heineken or Amstel, and a huge selection Belgian beers. And beers that simply aren't Dutch. Both big beer drinking countries, but totally different cultures around it.

Language
There's a huge difference in the way that Dutch and Germans approach speaking English with foreigners/expats. I cover it below.

Things to do
There is so much more to do in Amsterdam! Festivals all summer long for kids, families, or just adults. We love the Sunday Food Market, have seen a great performance of the Gruffalo at Vondelpark, and just this week went to the theater festival Parade. There is always something going on! And of course there are parks, swimming pools, and petting zoos to keep us busy when there's not something more major going on.
Best of all - it's Amsterdam. Even after 1.5 years here, the city is itself an attraction. Just a bike ride or a stroll along the canals to a nice coffee shop is still such a pleasure.

I really enjoyed living in Düsseldorf, but it's a much quieter place with much less going on. There are lots of things I miss about it, but I really love Amsterdam!

*Disclaimer: The cities we have lived in may not be representative of the entire countries. Just sayin'.

How did you think it would be and how is it "really"?

When I first moved here, I was definitely excited about it. I had certain expectations of what life would be like here, and how I would like it. I was optimistic. And I have not been disappointed.

What has been the biggest surprise?

The biggest surprise for me has probably been how much I need the support of other expats. This doesn't apply only to our move to Amsterdam, it was something that I slowly learned in Germany and have been reminded of as we settle into a new city again.

When I first learned that we were moving abroad, I pictured myself a year later sipping coffee and chatting fluently with my new German friends. I figured if I was going to live in Germany, that was the way you do it. Two months after moving to Germany, I literally stalked a young couple with a small child speaking English in the street because I realized I needed to meet people that I could talk to. People that would talk to me. Turns out those people are other expats.

When we moved to Amsterdam I knew that I was going to be part of the expat community here, and I knew that forums like Amsterdam Mamas were going to offer me great support. And I was right. It's FB page is a place where you can ask questions about where to find things that would be so easy find back home, or just ask for advice on dealing with your difficult child.

This sequence of events pretty much sums it up. I found out about a cloth diaper meet up through Amsterdam Mamas. I attended and met some other expat moms who told me about an upcoming event on giving birth in the Netherlands, and I was 7 months pregnant. I attended that info session, and met a Canadian doula who would be my doula for Ebba's birth 3 weeks later. When I had breastfeeding issues, she suggested I contact a former LLL leader for some help. She helped me out and I started attending breastfeeding/mother support groups, where I have met lots of new moms with babies and made new friends.
I have probably made it sound too easy and idyllic. It glosses over the first 8 months we lived here when I hardly made any friends at all, because I was pregnant and just didn't have the energy. When you move to a new city you are always starting over. I had just left behind a great group of friends in Düsseldorf and really didn't want to do it again. But I've started over, and I'm building again. It feels good!

Do you miss speaking English with other native speakers? How much stress do you have around language?
I get to speak to plenty of native English speakers. English seems to be the "other" language here in Amsterdam. My favorite brunch place is run by Kiwis, and the menu is in English and the servers speak English, not Dutch. Dutch people have to switch to English to order. It's quite strange, really.

This is quite a change from living in Germany, where you really had to speak German in your daily life. I NEVER speak Dutch. And I will admit that I am not proud of that fact. Being already familiar with German, I have picked up quite a bit through listening and reading, but I never really attempt to speak it. Except to small children. It's just not necessary. Which doesn't mean I shouldn't try harder. I really should. I will.

How many tranny hookers did you see?

I have passed by the windows in the Red Light District a few times, but I can't be sure how many were tranny hookers. Hard to put a number on that one, sorry. (There are some good Asian supermarkets in that neighborhood, ok?)

What did you dislike most about your first year in Amsterdam?

I know this might sound odd, but I have been having a hard time finding food. In Düsseldorf, we had a lovely Farmer's Market in our neighborhood every Wednesday and Saturday with all locally produced, high quality products. It was small yet it had everything you needed and I never questioned the quality of what I was buying for my family. I rarely purchased vegetables, eggs, chicken, or meat from a grocery store.

Here I have been largely shopping at the chain grocery store, because it's convenient. Part of the it just the logistics. By the time we moved here Simon was done with the nice big stroller, which also served as my "trunk" equiavalent for hauling things around. I can't really carry more than 2 grocery bags, especially with 1 or 2 kids in tow, or while pregnant.

Of course there are nice markets here as well, but it has taken me a long time to sort them out. The Saturday Noordermarkt is great and has lots of organic options, but it's packed. The Albert Cuyp Market is walking distance from our house, but it doesn't seem very high quality. I have finally settled on the zuiderMRKT in Oud Zuid, a quick bike ride away. It's reminds me of my German market, except the it serves fresh crepes (bonus!). It's perfect. Except for when it rains, like this past Saturday, and I just can't bring myself to get over there. But I found good food, and that's important.

It's funny, but writing this post has reminded me what a hard year it has been. I had honestly kind of forgotten, now that we are over the hump of making new friends and figuring our shit out. Moving to a new city, especially a new country, sounds exciting and romantic. And it is, or it can be. But it's also a lot of hard work and emotionally exhausting. I'm glad we've passed that year mark, and don't plan on moving again any time soon.
Posted by simonsays at 5:08 AM No comments: Links to this post

We just got back from our first real vacation as a family of four. We decided to keep it simple and do a beach vacation in Mallorca, Spain. Turns out it wasn't exactly a beach vacation, as we were staying a ways from the beach. In addition, Simon was sick and not allowed to swim for the first half and Ebba is a mess at the beach with her serious rock and sand eating disorder. But, in the end, it was a success!

Our house was located just outside the small mountain village of Bunyola. It seems like it's on no one's radar, which suited us just fine. We went into town every morning and had coffee, fresh orange juice, ensaimadas (the local breakfast pastry), and bocadillos.


We went to the same place every morning, where they knew Simon's name and he insisted on paying. The first time he paid came out, quite proud of himself, and told us, "I said danke schön." Not sure how he managed to say thank you in German rather than Spanish, but it was pretty amusing. He did stick to gracias after that. 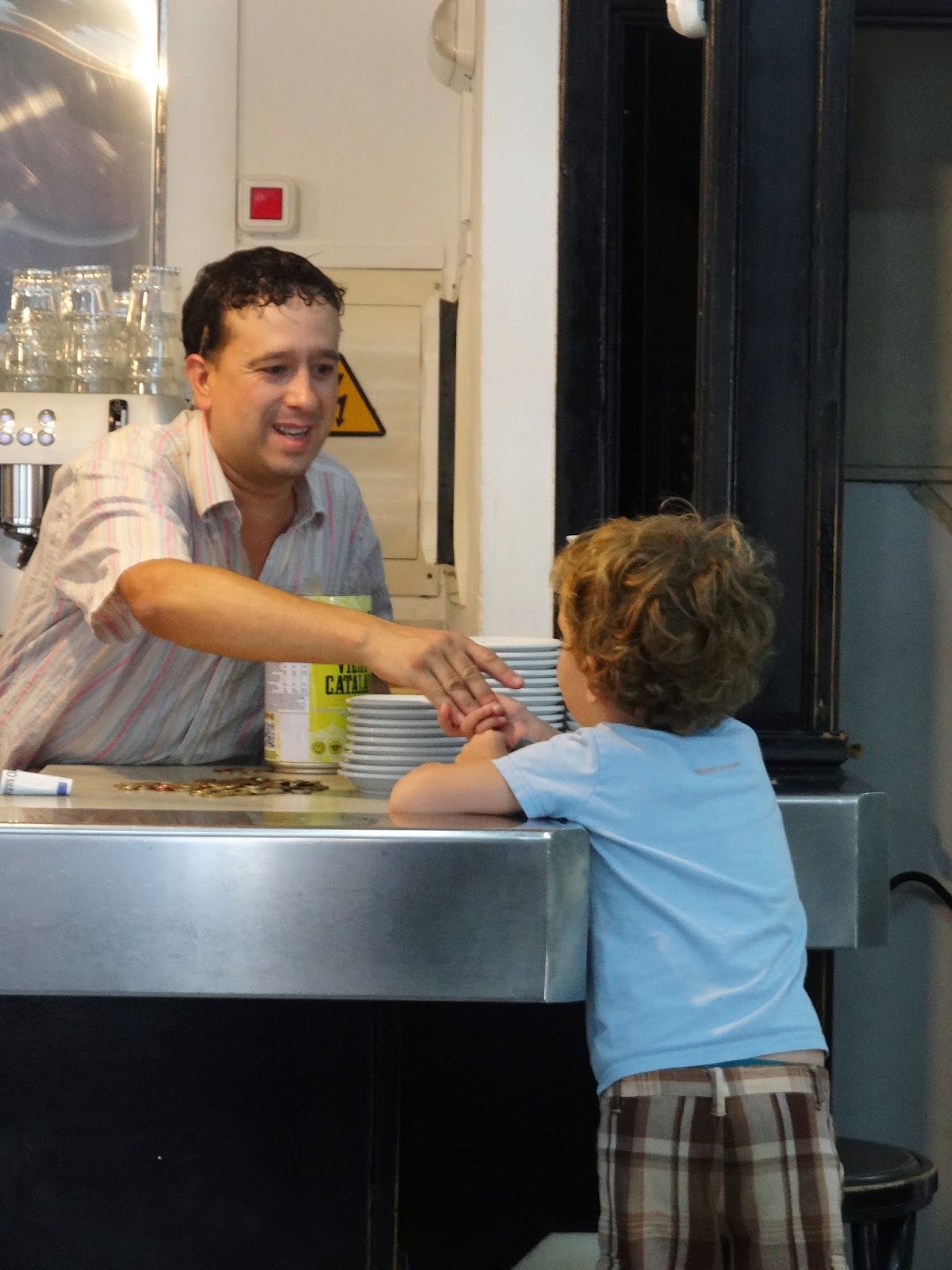 Mallorca is quite a hot spot in Europe. Beautiful beaches and warm weather bring throngs of tourists to the island. Lucky for us we stayed to the west among the Serra de Tramantuna mountains, which caters to a more laid back, outdoorsy crowd. The drives were stunning (and challenging and sort of terrifying) as we had to descend from 700 meters directly down to beaches below. One hairpin turn was 270 degree, with the road winding under itself. But the drives were worth it with beautiful cove beaches surrounded by forested mountains.

We also loved having a house as our home base. We enjoyed lazy days by the pool, sometimes while both kids napped (or watched a movie) inside. It also gave both kids plenty of space to move around. Simon earned his keep as big brother by keeping Ebba away from the stairs and making sure she didn't get outside without one of us. She sure tried.
In the end it felt like a vacation, even with 2 kids, and one of them sick. We were away from the monotony of our daily lives, away from work, away from school pick-ups and drop-offs, and the endless "to-do" list that is always there when you are in your own house. 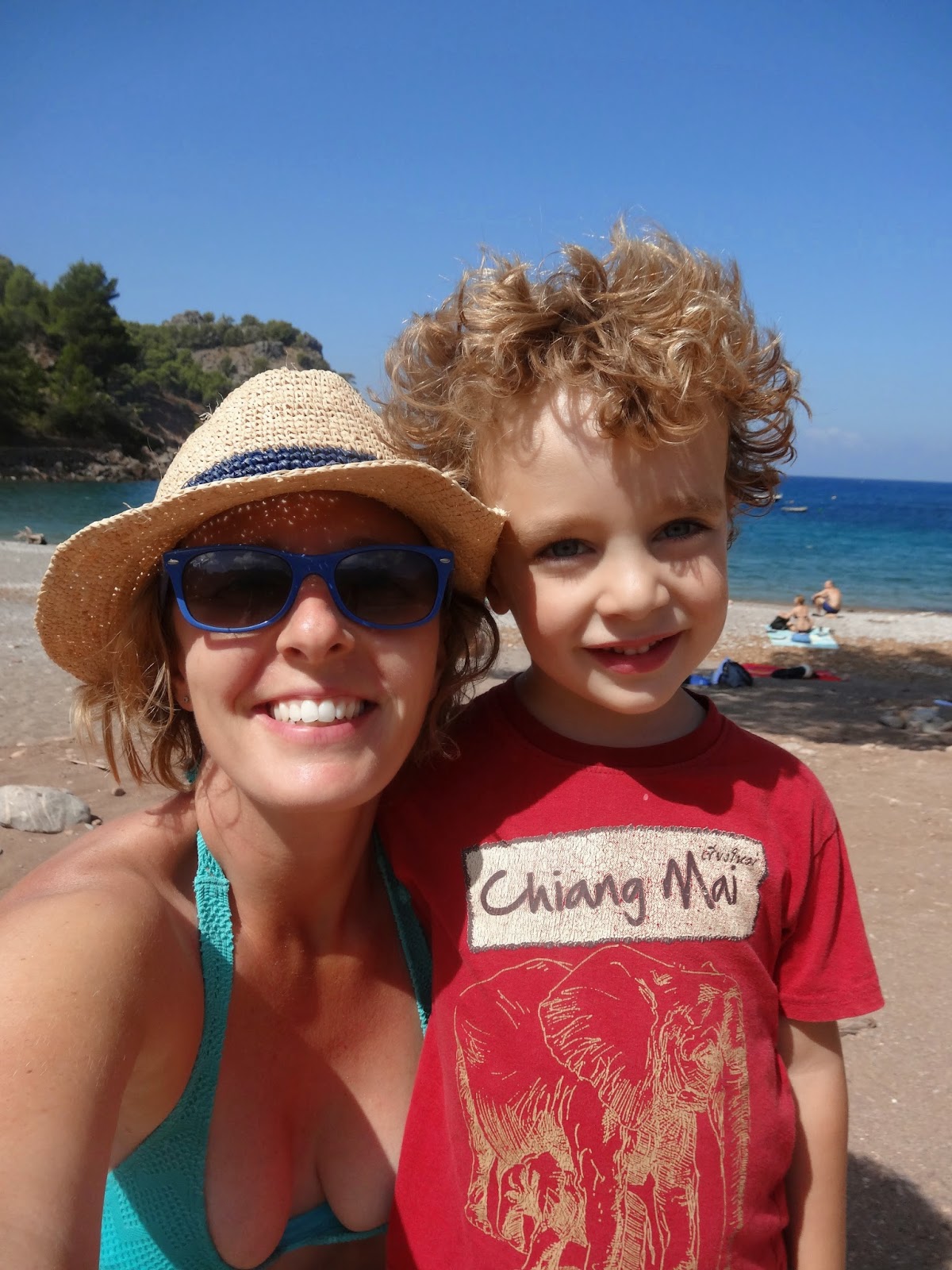 This was a really good first vacation for this family of 4. Can't wait for the next one!

Posted by simonsays at 5:03 AM No comments: Links to this post