I wrote before about how I stalked a couple I heard speaking English, and was eventually hooked up with an ex-pat group of parents. It was just an email list, that our friend Keith organized. And it kept growing. And it was just an email list. It originally started as a very small group of a few expat parents who found each other and had kids the same age. But it kept growing. And I couldn't get over how archaic an email list seemd. With so many social networking sites and online resources it just seemed wrong. As the group grew, members were receiving tons of emails each day, many of which didn't apply to them. It was getting obnoxious.

I had been bugging Keith since I first met everyone to put the group on Facebook. It was so much more practical, and I thought accessible to people. But Keith mentioned that some people weren't on FB and were adamantly opposed. Now, I get that. FB is not for everyone, and Keith didn't want to be exclusive. Fair enough.

But I saw another side to it. You could only join our little group if you met someone in it, or if someone saw you post something on Toytown (the German expat website) and then responded to you and told you about it. That seemed exclusive in its own right. And as the group was getting so big (about 75 people), there was no real good way to network with such a huge email list.

So I staged a coup. Keith was leaving and giving up his duties as LEADER, and there was no time like the present. I created a FB page - Düsseldorf Toddle Play Group - and I floated it out there. Requests to join started pouring in - and as of today we are 124 members!

This is resource that I wish I had had when I moved here. We share information about living in Düsseldorf, applying to Kitas, where to get your kids hair cut - you name it. And the beauty of FB is that you only have to read or follow what you are interested in, so you aren't bombarded with a million emails each day. It's so comforting to have all of these virtual friends who are, in so many ways, in the same place that you are.

So if you are new to Düsseldorf and you have kiddos - please join our group! I can't wait to meet you!
Posted by simonsays at 6:17 AM 5 comments: Links to this post

For those of you still brushing up on your French, I'll save you a trip to googletranslate; a weekend without baby...in France! Two years later - but we finally did it. No longer breast-feeding and an extended visit from Grandpa meant we were getting the heck out! Five days in Antibes France while Simon bonded with Grandpa. 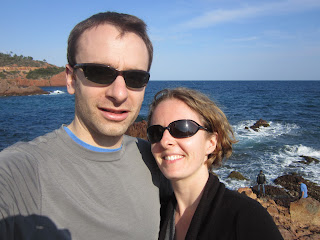 Martin and I had been looking forward to this trip (or the idea of this trip) for a very long time. While we love spending time with Simon, we were both ready for a little time away. Sleeping in, not scheduling your whole day around naps (or at least other people's naps). And in France? I could hear the patisseries calling my name...
We weren't nervous about leaving Simon. We weren't afraid we would miss him too much, knew (hoped) he would behave for Grandpa, and didn't really think he would miss us too much. And it all worked out. I did miss him, but not too much. I sometimes wished he was there just for a moment to play in the fountain or run along the beach, but mostly we just enjoyed ourselves. We called in to check on Simon each day, but didn't have Grandpa pass the phone on to him as we didn't want to mess with a good thing. And Simon, well, he didn't even ask about us. He was so happy to be with his super-fun grandpa that he didn't want to bring us up, just in case that meant that we would come home. 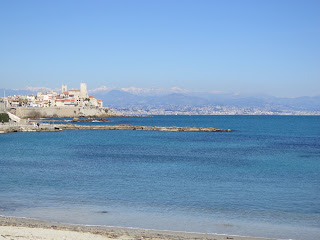 Martin and I enjoyed delicious French food and SUNSHINE! It's been a while since we've seen the sun shining here in Düsseldorf, so this was a very welcome change. We each read a book within the first 24 hours. We lounged around in the morning (I had forgotten how nice that is!). We simply relaxed. It was divine.
When we got back I was really excited to see Simon. I was curious as to how he would react. He heard us come through the door and came running out all excited, but then he wasn't so sure. I picked him up, but when he saw Martin then he got excited. He reached out for his Pappa like I've never seen. Well, good for Pappa. I'm sure he missed me too though.
It was funny just to see Simon again - he looked different. Like he'd grown up a little. And he definitely weighed more (seriously, we don't have a scale, but he gained some weight). I can tell that time with Grandpa was good for him, he was acting a little differently. More verbal. More active. It's good for him to spend real time with someone other than ME!
For all you parents out there contemplating a little get away - do it!
Posted by simonsays at 3:39 AM No comments: Links to this post

Simon turned two a few weeks back, and we finally had a chance to have his birthday party while Grandpa was visiting. It was a lot of fun and a lot chaotic! Wow - I can't believe my baby is 2! 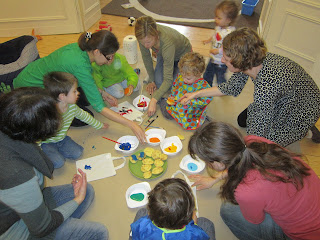 Here are some more pics.
Posted by simonsays at 6:42 AM No comments: Links to this post

Should I trust this guy?

Martin and I are leaving Simon with Grandpa for 5 days while we enjoy some time together in France. Should we trust this guy?
Posted by simonsays at 4:26 AM No comments: Links to this post