I first heard about PEKIP through some of other parents I met here in Germany who had gone through it with their children. I knew that it was a class that mostly mothers attend with their babies during baby's first year of life, that you attend with babies of similar age, that it's taught by some sort of licensed instructors, and that it's - well - in German. So after getting a recommendation from Simon's physical therapist (who, incidentally, has a grandson born on Simon's due date) we finally entered our first PEKIP class in November!
The first day did not get off to a good start. I arrived at the address where I thought the class was being held, but could find no sign of it. I called Martin (who had to come out of a meeting) and asked him to check my email because it appeared I was at the wrong spot. I had been corresponding with the instructor in German, so I would not have been surprised to have misunderstood where the class. Turns out - I was at the right address. What I had overlooked was the words im Hof, which means more or less in the Garden. I hadn't noticed or thought to check a little courtyard area that you can find behind many buildings. Only 10 minutes late - we had arrived!
We walked in and joined 7 other mamas and their babies on the floor mats of a nicely heated room. All of the babies were either naked or their diapers, so I stripped Simon down to his unterhosen as well. 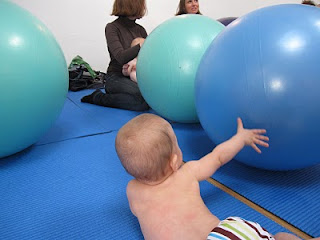 I would describe it as a support group for moms. We sing songs and give the babies a chance to play and interact together. Most importantly, it gives moms a venue to connect with other moms and talk about frustrations, successes, worries, doubts, etc. Is this normal? What should I do? When should I start this? It reminds me of Parents Anonymous, a support group program for parents in the US, only with a name that doesn't seem to suggest some sort of parenting deficiency (love the program, not the name).
The song we open with has these lyrics, which I think are a good reminder to all parents:
Erst ich und dann du (First me and then you)
Good stuff. 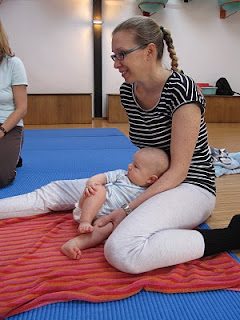 Simon's best German buddy - Tim.
For me, it has been a great opportunity to meet German friends and force myself further into German culture. I participate in German, and usually understand what we are talking about, but maybe not everything that is being said. And, of course, Simon loves playing with his new buddies!
A quick google search lends a more formal explanation as to what the program is and where it got started. You can find it here.
Posted by simonsays at 1:41 PM No comments: Links to this post

(I started this post in August)
I was recently asked if we had picked out a Kindergarten for Simon yet - "there's a 2 year wait, you know." WHAT?? NO - I DON'T KNOW!! Here I am, looking at my sweet little 6 month old boy, thinking about when I am going to start solids - not where is he going to go to Kindergarten. So the search for a German Kindergarten begins. (Let me point out that 1 year ago today (August 26) I still didn't even KNOW that I was pregnant, or that I was moving to Germany - so I don't feel too bad about being behind the ball on this one.) 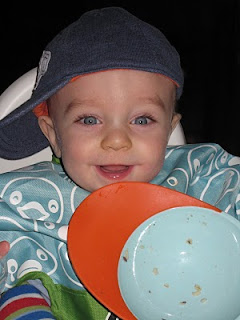 (And now I am continuing)
First, let's talk about the word Kindergarten. It is a German word that literally means "children's garden" and in the US it usually refers to the first year of school. However, in Germany it is more like preschool, and usually starts after the child turns 3. So apparently, I am not looking for a Kindergarten, but a Kita. From what I gather, it's like daycare/preschool. And for whatever reason, it has recently become harder to enroll your kids in Kita and people usually start before their baby is due.
Here's what I know about the process so far:
So, I really don't know much, and that's because I really haven't done much about it. I guess if there is any chance that I work while I am here that I need to start checking into it. It's one of those things that I just keep putting off. For now, I am happy at home with my little guy.
Posted by simonsays at 9:59 AM No comments: Links to this post