So, I thought we were having professional pictures taken of Simon today. Apparently we are not. Not sure what date they were supposed to be, but not today. That's what happens when you make appointments in German. Oops!
Posted by simonsays at 11:54 AM No comments: Links to this post

Simon kind of has two ages. One is based on his birthday, let's call that his real age. The other is based on his due date, which is his adjusted age. From the day he was born we talked about his age differently. First we referred to his gestational age - how many weeks he would be if he were still in my belly. We were also told over and over by doctors and nurses that going forward, for at least the first two years, all developmental milestones and should be based on his adjusted age. Makes sense. It's not like he got a head start - he just spent his 3rd trimester outside rather than inside. 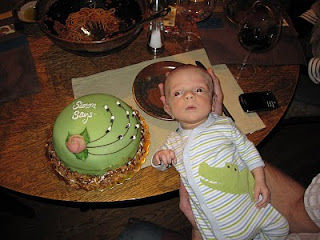 But when we were finally out in the real world, it became a little complicated. Of course you naturally think of your child's age based on their birth date. But when they're small, 2 1/2 months make a big difference. I did finally start telling strangers his adjusted age - it made it easier than having to explain why he was so small (especially in German).

Because Simon was our first, and he seemed big to us, we didn't really have the perspective of how me must have looked to others. Like when we took him to a Mavericks playoff game when he was only 37 weeks gestational age (that's 3 weeks before his due date). 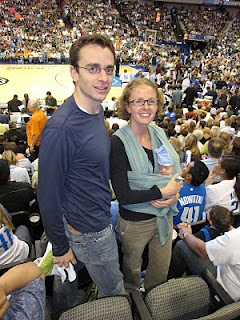 Now Simon isn't really all that different from a 10 1/2 month old, even though his adjusted age is 8 months. But somehow, I still feel all mixed up about his age. I feel like I'm always going back and forth. Yes, he can start to eat yogurt at 9 months, but he's only 8 months but he's 10 1/2 months.

Also, we have been playing with a lot of babies his age lately, with swim classes and PEKIP, and I see how much he is more like an 8 month old than a 10 1/2 month old. It's not his size, but more subtle developmental phases, like crawling and body control.

Last month he had a check up with a specialist to evaluate his development as a preemie. She was very impressed and said that he was spot on for his (adjusted) age. Our PEKIP instructor has also been impressed by his size and development. These little things help me - the little reassurances. Every mom likes to hear how well their kid is doing. But if you kid wasn't doing well at the start - and is now - it means even more. He's been a fighter from the start. 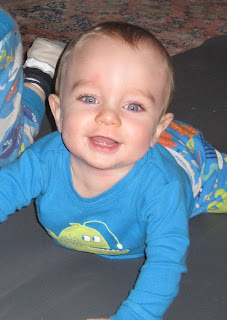 Check out our Caring Bridge blog we kept while Simon was in the hospital.
Posted by simonsays at 11:42 AM No comments: Links to this post

With the start of the new year we are all busy making resolutions on how we are going to make our lives better. I'm not big on New Years resolutions, as it seems silly to not always be working to improve our lives. Why wait until January 1st?
But ifI were into New Years resolutions, I would say that I am going to try to be more consistent about writing in my blog. What better way to start than with Simon's first Christmas! 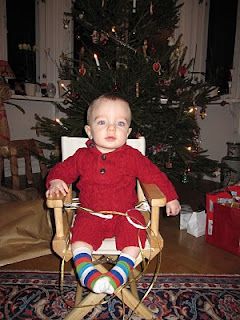 We spent Christmas with the Oppenheimers in Stockholm. For the first time EVER everyone was there - all the siblings with their spouses and the 3 little cousins. We spent Christmas Eve opening gifts and feasting on herring (definitely an acquired taste). Santa even stopped by! (Click here for video.)
Unfortunately, a stomach bug hit the house during our week, although Martin and I and the kids were spared. During the week we relaxed around the house, Simon ventured into the city for the first time (although he slept the whole time), and we met friends and had Peking duck for the first time. This trip also marked Simon's introduction to sledding - an important sport growing up in my family. He wasn't thrilled with it, but not totally unimpressed either. He didn't flinch when we pushed the limits on speed - I am optimistic he will be an excellent sledder!
Who needs a stroller? We used a sled instead when visiting a friend in the neighborhood. 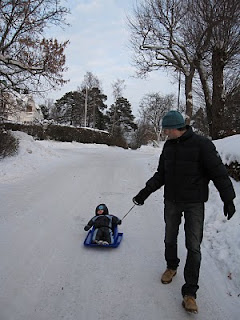 We are very excited to the year ahead of us. I am especially excited to celebrate Simon's first birthday (with his cousin in Charleston!) and try to use all of Martin's 6 weeks of vacation. It's going to be a great year!
See more pics of our holiday trip here.
Posted by simonsays at 7:21 AM No comments: Links to this post