May 10th was Simon's due date, so technically Simon just turned one again celebrating his adjusted age birthday. It was an excuse to bake chocolate chip cookies and share them with friends at our regular Tuesday meetup.

Now, let me be clear that it was not a shameless plot to get more attention for Simon and have another party, it's actually kind of a big deal. To me, that is. This first year, it definitely is another milestone. It feels like I can just let go and let Simon be his real age. But for me, his mother, May 10th will always be the date he missed by 11 weeks. My spring baby born in winter. 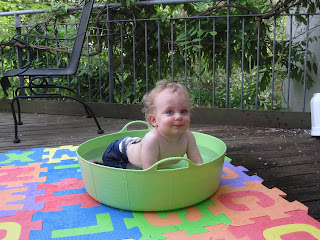 You look at Simon now, and there is nothing preemie about him. He is bigger than some kids his real age, and definitely looks like any other one-year-old out there. So in a sense - it's over. He doesn't need any special preemie care or doctor appointments any more, he's just like any other kid.
But the thing is, for me, it will never be over. I don't mean that in the sense of his development - I agree he's just like any kiddo his age. It's just that it was a big deal. It happened to me. It was my baby that came early, that couldn't stay in there any longer, that laid in a hospital for 45 days and spent EVERY NIGHT alone, without his mother.
For me, May 10th will always be a day when I think of Simon and how lucky we are that things have turned out the way they have.
Posted by simonsays at 3:48 AM No comments: Links to this post

In honor of Mother's Day yesterday, pappa and Simon prepared a little scavenger hunt around the house with a prize at the end. I was very surprised and excited, running around trying to figure out the clues - and get to the end of course. Nearly every clue included a picture of Simon. At the end - my long lost shoe! I had been missing one of my shoes but knew it was somewhere in the house, but Simon (pappa) found it! It was perfect - I was so happy! 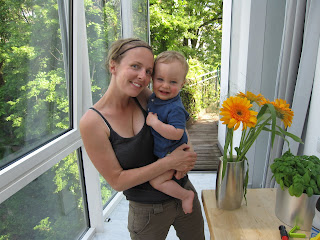 Then we went out and watched the Ddorf marathon (always inspiring!), Simon took a nap, and we went to Auermühle for cake and a Krakauer (brat). A fabulous Mother's Day in the 11th best country to be a mother.

Save the Children put out its 12th Annual Mothers Index, which analyzes health, economic and educational conditions for women and children in 164 countries. Scandavia is a mother's haven, with all countries ranking in the top 10 - Norway (#1), Iceland (#3), Sweden (#4), Denmark (#5), and Finland (#7). And where is my good old motherland? Down there at #31, consistently coming in as one of the worst ranked developed countries. High infant and maternal mortality rates, poor early childhood education, and a maternity policy known as "the least generous of all wealthy nations" are major contributing factors to this low ranking.

And to be honest, it's something I have been thinking about since moving to Germany. Not where the US ranked on the Mothers Index (although let's be honest - no surprises there), but how these more generous maternity policies shape the experience of being a mother.

When I gave birth to Simon, the choice was easy for me. I was moving to a new country and didn't have a job - so I would stay at home. I was so happy and realized what a gift it was. But of course I am not getting paid, so it requires an adjustment of our expenses. And I don't have a job to go back to, so it does leave a gap in my resume and an uncertainty about my professional future.

On the other hand, for those in Europe that have one year of paid maternity, the stakes are quite different. Often they begin maternity leave 6 weeks before the due date, and stay at home until the baby turns one. All this time they are getting paid (not full salary - a percentage with a cap), but it's something. And then, when your baby turns one, your job is still there - you get to go back to work. And often times, now your hubby gets a chance to stay home with your kiddo for a while - maybe 2 months, or another year.

For me, that's the best of both worlds! You get to be a stay-at-home mom for a year, and then you have the opportunity to go back to work if you want. Not ready to go back to work? Many countries will hold your position for up to 3 years (unpaid after one) to give you more time at home. They also often have flexible hours upon return so that you are not thrown into full-time work right away.

Now, I am not advocating that the U.S. can simply adopt these same policies. They operate under entirely different systems and for different political reasons (low birth-rates among them). I just want people to see how different the experiences are, and understand that American women are not being bad mothers or making bad choices for their babies when they go back to work after 12 weeks. Most American women have to choose between staying at home and going back to work - they can't do both. Therein lies the difference....
Posted by simonsays at 3:42 AM No comments: Links to this post

Hard to believe it's May 1st today and April is already behind us. I was talking to my sister today (Marie) and we agreed it should be March, not May. How time flies!

Anywho, I wish it was March so I could do April all over again. It was that good. It started off with a weekend in Bussum, the Netherlands, where we did a pre-birthday celebration with my cousin whose birthday is a day after mine (April6, April 7). We were supposed to check out the famous tulips, but due to a cold spring they were blooming late. So instead we checked out the crazy Dutch bike culture (ie. Mama bikes) and ate pannekoeken. 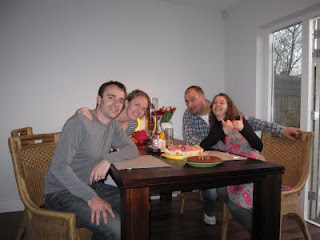 Next we headed to Antibes, France (near Nice) to celebrate my mother-in-law's 60th birthday. This meant that we arrived on my birthday, in time to have lunch in the warm sun, eat some delicious French cake, and get some shopping in. :)
The next day was Antonietta's big day - and we celebrated as a family (minus Magnus who is living in NYC) and found a restaurant with 3 highchairs. Needless to say we went back there several times as a place that could guarantee we wouldn't have squirmy, messy kids on our laps and we could maybe even enjoy a glass of wine. The whole weekend was very relaxing, filled with good food and good family. We didn't really do anything, except walk around, make sure our kids napped, and stop at every other patisserie (that was just me though). I did discover a sugar covered donut stuffed with nutella - need I say more? (Pics here).
So the only thing that made leaving Antibes easier was knowing that in just another week and a half we would be heading back to the land of patisseries to join the Stirling Palm's (is there a hyphen or what?) for a long weekend in Reims, the champagne region of France. We really managed to have the perfect weekend, with the SP's arriving early and able to kick the jetlag straight away, perfect weather, amazing food, and a great place to stay (La Parenthese). We toured champagne houses, drove through the vineyard-filled countryside of Champagne country, ate a lot, and had Easter lunch at a chateau with a MOAT! Pretty cool. (Pics here).
Simon enjoyed the late nights, where dinner started at his bed time, and he got to sample seafood risotto, pigeon, chocolate mousse, lamb - or whatever we were eating. He was so smitten with the French lifestyle that he forgot to be cranky - for which we were very greatful!
(Trooper award goes to Hanna - 20 weeks pregnant and she flew all the way over to France for 4 nights. Given her dedication to her friends, she will be a fabulous mother.)
And yes, I know what you're thinking. We are living large over here on the other side of the pond (well - depending where you are reading this from). And I am not going to argue with you on that one. But here's the thing. We don't know what the future holds for us - if we will stay in Europe or end up back in the U.S. I would have to leave a in few years and realize I didn't take advantage of all that is right at my doorstep here (4 hours to Reims, 1.5 hour flight to Nice). And for now, we only have one kiddo, and it's manageable (but not always easy) to travel with him. (Did I mention the 6 weeks of vacation - that helps too!) So we are working hard to see the sights while we can. There's lots more on our list - so stay tuned to see where we end up next. :)
Posted by simonsays at 11:52 AM No comments: Links to this post